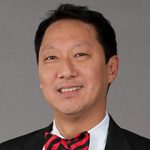 Dr. Santa Ono is the 15th President and Vice-Chancellor of the University of British Columbia. Prior to coming to UBC, he served as Provost and subsequently President at the University of Cincinnati and before that as Senior Vice Provost and Deputy to the Provost at Emory University. Dr. Ono’s research focus is in the area of the immune system, eye inflammation and age-related macular degeneration and he has worked at Harvard, Johns Hopkins, University College London and Emory universities. He holds degrees from the University of Chicago and McGill University. Dr. Ono is an enthusiastic supporter of the arts and still finds time to sing and play his cello. Dr. Ono was a recipient of the 2016 National Association of Asian American Professionals (NAAAP) 100 award.

He is an elected Member of the American Association for the Advancement of Science and the National Academy of Inventors. He was elected Fellow of the Canadian Academy of Health Sciences and received the University of Chicago Professional Achievement Award in 2017.

As a professor of medicine and biology, Professor Ono has worked at Harvard, Johns Hopkins, University College London, and Emory universities. In 2015 he was inducted by Johns Hopkins into its Society of Scholars, which honours former faculty who have gained distinction in their fields, and in 2017 he was inducted as a Fellow by the Canadian Academy of Health Sciences. Ono’s research encompasses the immune system, eye inflammation and age-related macular degeneration – a leading cause of blindness.

Ono is deeply committed to diversity and his achievements were recently recognized by the American Council on Education with an award that honours individuals who have demonstrated leadership and commitment on a national level to the advancement of racial and ethnic minorities in higher education. Inside Higher Education named him America’s most notable university president in 2015.

An avid music lover, Ono studied at the Peabody Conservatory of Music in Baltimore and still finds time to sing and play his cello – even taking to the concert stage to perform on occasion. Ono is married to Wendy Yip, who trained as an immunologist at McGill and as a lawyer at Boston University. They have two daughters.