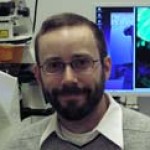 My research focuses on the biochemical and cell biological mechanisms underlying the inherited retinal disorder retinitis pigmentosa. This disorder is associated with death of the retinal rod photoreceptors, which are responsible for dim light sensistivity, and delayed death of cone photoreceptors, which are responsible for colour and bright light sensitivity. The research projects underway in my lab are focused on the mechanisms by which mutations in the rhodopsin gene cause photoreceptor death.

Currently, members of my lab are investigating the early mechanisms by which mutations in the rhodopsin gene cause cell death, with a focus on mutations that cause misfolding of the rhodopsin protein. We have recently established that some rhodopsin mutations can be “rescued” by a mechanism involving binding of 11-cis retinal chromophore.

In addition, we are investigating the late mechanisms by which death of rod photoreceptors eventually causes a secondary death of cone photoreceptors, as well as other long-term consequences of rod cell death on the retina, including retinal remodeling and the possibility of promoting retinal regeneration.

In order to carry out these investigations, my lab employs transgenic Xenopus laevis (frog) models of retinitis pigmentosa. This unique system allows us to generate transgenic animals very rapidly. The X. laevis retina also has excellent properties for our analyses due to the large size of the rod photoreceptors, and the almost equal proportions of rods and cones in the retina. My lab employs many different techniques in our studies, including molecular biology, confocal microscopy, protein chemistry, and electrophysiology. 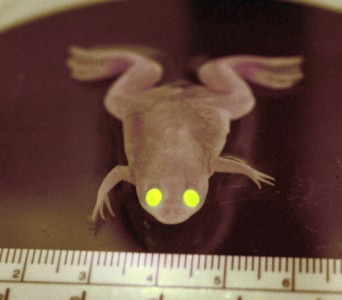 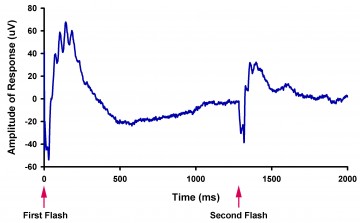 Double-flash electroretinography trace demonstrating the isolation of the cone-driven electrical responses in the X. laevis retina. The first flash produces a mixed response from rods and cones. Because rods do not recover as rapidly from the flash, the second flash produces an all-cone response (Lisa Hamm).